Our lifeboat Crab was unsinkable, but that didn’t mean we couldn’t be thrown out and drown in heavy seas as we sailed the Greek Islands. Here is the entry from my memoir Crab’s Odyssey about running a storm from Preveza in Epirus, Northwest Greece, to Levkas Bridge on the Island of Levkas.
If you want to buy my memoir of 3 summers of sailing from Malta to the Bosphorus, click here.

3rd August 1957: Prevaza to Levkas
“After we had changed to storm sails, Sally put me at the helm. In this situation, running downwind, the helm was generally given to me. I had grown up on the edge of an estuary where the spring tides ran at up to four knots, and if tide was running against wind, short steep seas would be pulled up in a matter of minutes.
“The waves were now of a considerable size. It was exhilarating to be at the helm in this weather. It was not just a matter of co-ordinating hand and eye, and the feel of the wind on my cheek. I sat perched up on the gunwale so as to be able to swivel round and see what was coming up behind, being constantly drenched with cold spray. My oilskin jacket had a hood of course, but I could not use it because I needed to have all-round vision.
“’Wow! That was a big one! This is fun!’ I exclaimed, trying to convince myself.
“The wind was impressive now. It tugged at the small sail, visibly lifting the boat as the gusts came. The helm was hard to control. This was unlike any conditions I had met. In the estuary if a sudden gale blew up one could anchor and ride out the gale till the tide dropped and one could wade home.
“In a wind like this I had never actually been at the helm. Here there was no alternative but to push on. These waves would have started somewhere in the northern end of the Adriatic, and had rolled their way southwards, gaining momentum. They were as big as elephants and I was scared.
“My chief difficulty was that the wind was on our quarter, which meant our course lay diagonal to those waves. Whenever a particularly steep wave rose up behind us I would have to swing to meet it fair and square, the pointed stern directly cutting it. If I should turn the boat too late, and catch a big wave on her quarter, she would be swung round sideways by the wave’s impact. The technical word for this is ‘broaching-to’. If we were to broach-to in this way, and the boat were to lie sideways to wind and wave, the full force of the wind would suddenly hit the mainsail, at a moment when we were already tilted by the overtaking wave. We would turn over – everybody and everything getting tipped overboard as if dumped by a dumper-truck.
“With one hand on the tiller, in my free hand I grasped the rope that controlled the foot of the storm mainsail. And in order to keep swivelling round every few minutes to see what was coming up behind us, I still sat perched up on the gunwale, with no hand free to hold on with. I remember like yesterday the utter drowsiness induced by being constantly drenched with cold water, till I was chilled to the marrow. Once I almost went overboard – I must have momentarily fallen asleep. What was worse, I had the tiller firmly grasped in my hand as I began to fall – the crew would have lost their tiller as well as their helmsman. Sally raised a strong arm and grabbed the tiller; either Robin or Maggs must have grabbed me.
“We intended to aim for the harbour of Levkas, but the entrance to Levkas Sound was impossible to make out, the island lying so close to the mainland. Ahead there was no other vessel which might have indicated the route to us. Visibility was poor – the air laden with a fine mist. Robin moved close to me, singing a seemingly endless repertoire of Irish folk tunes in a soft voice, to keep my spirits up. 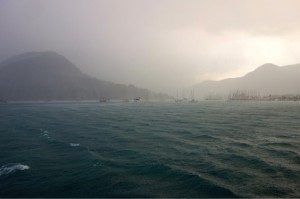 “Maggs drew my attention to a caique which had become visible behind us, under shortened sail, but overhauling us. It was enormously comforting to see another boat in the distance. All of a sudden Maggs, who was baling, shouted that it was gone. She had seen it keel over and disappear. None of us three saw what happened, all we knew was that it had been close enough behind us for us to hazard a guess – from what we could see – that there was only one man on board, and then suddenly it had disappeared from view. We knew we ought to go back and try and rescue that man we had seen at the helm, but we knew would never make headway against that sea under sail with Crab, and that lifting the engine, and lowering it overboard to mount it onto its brackets, would have been out of the question in such rough water. No one said anything. Words couldn’t help, in this situation.
“I don’t think Sally realised how serious our own situation was – or else she was too dazed with cold to realise anything till we got quite close to the shore of Levkas and still could not make out the harbour entrance. We were now getting quite close to a shore which consisted of a harbour-wall built of boulders and concrete, but we still could not make out the actual entrance, and the sea was as rough as ever. I shouted to her that we needed her, and it was her sharp eyesight that first made out the entrance to the Sound. She guided me towards it, and then, quite suddenly, we had rounded the harbour-wall and were in quiet water. We were safe!
“We were safe, but we were still travelling at five or six knots. I was stiff with cold and exhaustion I suppose, because before I could turn Crab’s head to the wind we hit the quayside head-on with our prow. I still recall that resounding thump, and my cringing embarrassment.
“Alerted I suppose by the loud thump, people emerged from a little café on the Levkas quayside. I remember their bemused faces, and them helping us ashore, stiff and dizzy with exhaustion, and the owner of the café insisting on giving us glasses of ouzo to revive us.”
An hour later a woman came into the little kapheneion with news that caused a stir. It seems the fisherman had lost his boat but had succeeded in swimming to shore with the wind blowing him.
Photo from the amazing travellers’ blog of modern adventures including a catamaran – have a look http://www.vagabonandave.com.