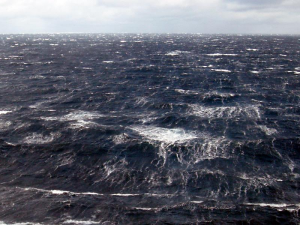 Why is the Mediterranean such an amazing place to sail, when for many holidaymakers and in most postcards it looks blue, beautiful, calm and placid? It is also a fickle host, prone to violent winds and storms, as we experienced in our unsinkable sailing boat and some of the most scary parts of my sailing book, Crab’s Odyssey.
Contrasts between temperatures above the countries surrounding the Mediterranean, compared to those over the sea, which is up to three miles deep, mean daily localized breezes, which often start northerly in the morning, become variable at midday and then pick up in a southerly direction in the afternoon. 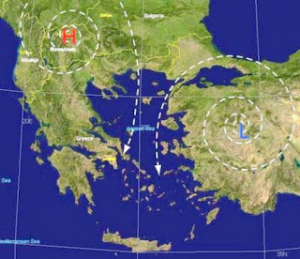 Meltemi wind funnels up to gale force through the Aegean (photo radio.kreta.de)

But there are also many sudden and strong winds, which have names, as befits their wily and wilful presence, including Meltemi in Greece and Turkey which blows from the Balkans, Mistral in southern France, Scirocco which originates in the Sahara, and Bora in Croatia. For example, the Meltemi is an annual wind of up to gale force, rises in high pressure over the Balkans and Hungary and low pressure over Turkey related to the Asian monsoon. It can bring winds of force 4 to 7, rushing down the mountains. Evoea is reported to have some of the choppiest waters in Greece.
As the surface of the Mediterranean evaporates faster than rivers fill it again, there is a strong current flowing west to east at 1-2 knots along the North African coast, especially in summer, and splitting into two near Sicily.

Pleasant spots for beginners
However, there are many relatively calmer spots which are great if you want to learn to sail boats in the Mediterranean. In the west there are Majorca’s surrounding seas, Costa Smerelda and islands off north-east Sardinia, northern Sicily and Côte d’Azur. In northern Greece, the harbours of Lefkas and Meganissi in the Ionian Islands, or Corfu, Ithaca and Cephalonia, or further south the Peloponnese and Saronic Gulf. Off Turkey’s Gulf of Fethiye and the Datça Peninsula or the coast between Pula and Korcula in Croatia are also good places for new sailors.

Where the winds get wilder
For more exciting sailing in the Mediterranean for more experienced sailors, the Meltemi can make hazardous sailing in the Greek island group The Cyclades, such as Santorini, Mykonos and Naxos, and Dodecanese, including Rhodes and Kos. These islands are also known for narrow harbour entrances and long distances, as we found in our own sailing adventures, and rock formations. There is also exciting sailing off the Balearic Islands, Elba and the islands between Tuscany and Corsica, off Spain’s east coast and Croatia’s 100-island archipelago called Kornati.
Our solution, finding an unsinkable sailing boat the Crab and setting off for the horizon with a turnaround of great friends, makes for great sailing memoire stories, but is not the advised way to do this. For those who enjoy adventure from comfortable safety, better to buy a memoir and read about our adventures sailing from Malta all the way to Istanbul and down to Rhodes.