Book launches are much fun, getting together old shipmates from the days of Crab’s sailing voyages around the Mediterranean islands to meeting fellow-writers and authors and getting such inspiring feedback from people who have read Crab’s Odyssey or want to read it. 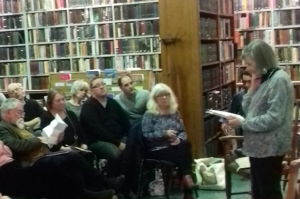 1st February 2017: At the Lit and Phil Institute, in Newcastle, as part of a big event, organised by the Red Squirrel Press, a Northumberland-based publisher of poetry and fiction.  My part in it  was designed as a thank-you  for support and advice from two very active writers’ groups, Vane Women who are based in Darlington, and the Newcastle-based Carte Blanche women’s writers group. The Lit and Phil is an amazing resource for us writers, the largest independent library outside London, opened in 1825 and welcoming to all visitors. 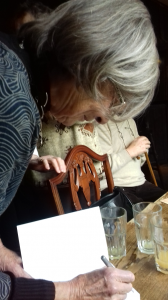 21st January 2017:  This launch was held in Oxford, so as to make sure the skipper, Sally Humphreys, would be there, at the Bear and Ragged Staff at Cumnor, a pub with a large carpark.  It was a gathering of old shipmates: in addition to the skipper there was fellow small-boat sailors Richard Davy (Sicily and Calabria, 1956), David Witt (Otranto to Corfu, 1956), and Ian Morin (east coast of Evia, 1957).  There were also 22 members of my family there – wonderful supporters – and my editor Shelagh Aitken, who had been such a joy to work with and is highly recommended, and university friends from Somerville College, Oxford. It was good to share the afternoon with so many friends dating back to our adventures sailing an open boat off Greece, Italy, Sicily, Malta and Turkey.

21st December 2016:  We planned a book-launch party at home – Horn’s House up a hill outside Witton Gilbert village – for family and friends just before Christmas, and then realised that we might have a lot of unwilling guests staying the night because their cars were stuck in the mud. In the end we made it into a “Long, Thin Party”, with not more that 10 cars at a time. But we sold about 40 copies, in spite of that.  The local newspapers were great at supporting a local author, and did us proud. There was colour double-spread article about my book which combined Mediterranean sailing adventure and autobiography in both The Northern Echo by journalist Gavin Engelbrecht, and The Durham Times. Robin’s photos – colour slides taken 60 years ago, and carefully stored – looked great in both articles.