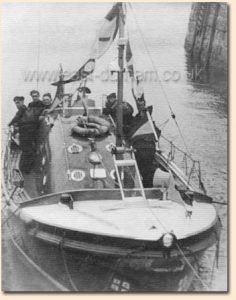 Great fun yesterday (15 November) as I gave a presentation on my memoir book Crab’s Odyssey: Malta to Istanbul in an Open Boat about sailing in the Mediterranean. I am very honoured to be at the Heritage Museum at Seaham, home of the famous Seaham lifeboat, 2 days before tomorrow’s 55th anniversary of the tragedy.

George Elmy lifeboat launched from its station in Seaham into huge seas on 17 November 1962 to rescue four fishermen and a boy from the Economy, a local coble boat, after a sudden gale blew up. The lifeboat had reached Economy and rescued all the crew within minutes at about 4:20pm.

It had turned for home in the storm and was running for the harbour mouth with less than 100 yards from safety when huge waves overturned it. The sea snatched the lives of the five heroic lifeboat crew and three of the fishermen and a nine-year-old boy. One man Donald Burrell (then 32), a miner, swam to the surface and survived by wrapping his right arm around the propeller shaft but could not find his young son who he had taken for a short weekend trip. Donald hung on grimly until he washed up on the beach with the boat, according to his eyewitness account at the inquest and this BBC account.

In 2009 the boat was spotted up for auction on e-Bay and a local group of volunteers, the East Durham Heritage Group, bought it and restored it to bring it home. It sailed back to Seaham on 24 June 2013, escorted by a flotilla of boats from the Royal National Lifeboat Institute (RNLI) charity , with hundreds of people watching. On the way, it stopped to lay a wreath at the spot where it capsized.
George Elmy was a Liverpool Class lifeboat. Penny says: “It was of the same sort of vintage as Crab. She is at least twice the length of our tubby little boat, has loops of ropes along for survivors to grab hold of, and has just a very small deckhouse amidships.”

Liverpool-class motor lifeboats were non-self-righting, and there were 2 types, single engines and twin engines. They were in service from 1931-1948, according to Wikipedia. Many lifeboatmen preferred the non-self-righting boats as they had better stability and the Liverpool class were light enough to be launched from carriages. It had an auxiliary sailing rig. There is also a road called George Elmy Lifeboat Way, created as part of a £100m regeneration of Seaham following closure of the coal mines. The lifeboat was later stationed at Poole in Dorset where it saved another 5 lives until it was decommissioned in 1972.

A picture of the lifeboat and its heroic crew can be seen above, together with the names of those who perished at sea. The bravery of all sea rescue people makes it possible for adventurers like ourselves to enjoy the sea and we are deeply grateful.

For my own story of sailing Crab lifeboat in a gale and luckily not getting overturned, although a Greek fishing boat behind us did founder, read here. Luckily that fisherman was blown and swam ashore and was saved.

Or buy the book! £2 from every sale of a book during this week will be donated to the East Durham Heritage Centre, so you can solve your Christmas gift problems and help a great organization and team of volunteers keeping Seaham special.